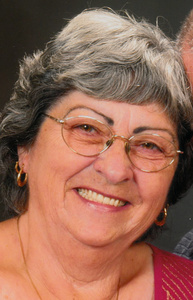 Wilma M. Slack, 72 of Streator passed away Saturday afternoon (Nov. 23rd) at her home surrounded by her loving family.
Following cremation, a memorial visitation will be held Wednesday from 4 â€“ 8PM with a prayer service   at 7PM at the Winterrowd Funeral Home.
Wilma was born on September 30, 1941 in Dietrich, IL to William and Pearl (Niendick) McSchooler.  She married Charles Slack Sr. on July 25, 1959 and he survives.
Also surviving are children Anna Slack Blue of Ottawa, Belinda (Gary) Ondrey of Streator, Colleen (Scott) Behrens of Streator and Charles (Deanna) Slack Jr. of Rock Island, 13 grandchildren and 15 great-grandchildren, sister Karen Behrens of Dyersburg, TN and her dog Rudy.
Wilma is preceded in death by her parents, sister; Thelma in infancy and grandson Michael Eggers.
She was employed at Thatcher Glass for 28 yrs and store manager at Dollar General and last at Camelot Manor.  Wilma enjoyed going to the riverboat, embroidery, and also hearing stories about her grandchildren and great-grandchildren.
Wilma graduated from Woodland High School in 1959.
Memorials may be made in Wilmasâ€™ name to the American Lung Association or to a charity of the donorsâ€™ choice.

To order memorial trees or send flowers to the family in memory of Wilma M. Slack, please visit our flower store.