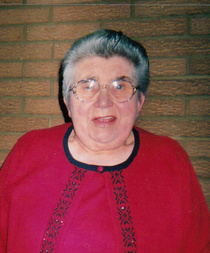 Czeslawa â€œTheresaâ€ Piatkowski, 92 of Streator passed away Friday morning (September 18th) at OSF St. Francis Medical Center, Peoria.
A visitation will be held Friday from 9 â€“ 11 AM at the Winterrowd Funeral Home. Mass of Christian Burial will be said Friday at 11:30 AM at St. Michael the Archangel Church.  Burial will be in St. Casimirs Cemetery.
Serving as pallbearers will be Rob and Clark Brown, Steve Greer, Dustin Piatkowski, Rodney Fultz and Terry Mikolajczyk.
Theresa was born on August 20, 1923 in Poland.  She married Walter Piatkowski  Sr on December 26, 1945 and he passed away on January 29, 1977.
Surviving are children, John (Nancy) Piatkowski of Streator, Mary (Bob) Brown of Princeville, IL, Walter â€œVodgeâ€ Piatkowski of Streator and Christine (Rodney) Fultz of Shabbona, IL, 6 grandchildren, James and Carissa Piatkowski, Rob (Michele) Brown, Dustin (Nikki) Piatkowski, Katie (Steve) Greer and Lindsay Fultz, great-grandchildren, Clark, McKenzie and Molly, brother John Nadzielska of Melborne, Australia.
She is preceded in death by her parents, husband, grandchildren, Richard Ryan and Dâ€™Anna Piatkowski and Eric Fultz and a brother Edward Nadzielska.
Theresa attended school in Poland and was a member of the former St. Casimir Church and Altar and Rosary Society and currently belonged to St. Michael the Archangel Church and the Polish National Alliance (PNA).  She retired after 23 yrs at Owenâ€™s Illinois Glass in 1983.
Theresa was dearly loved by all her family and she will be greatly missed.
Memorials may be made to the family of Theresa Piatkowski .

To order memorial trees or send flowers to the family in memory of Theresa Piatkowski, please visit our flower store.