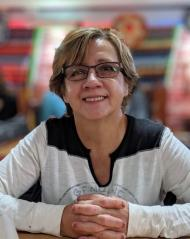 Shelly J. Sunnen, 61 of Manville passed away Wednesday afternoon (September 30, 2020) at O.S.F. St. Francis Medical Center in Peoria. A visitation will be held Tuesday October 6, 2020 from 10 AM-1 PM at the Winterrowd Funeral Home. Funeral services will be held Tuesday at 1 PM at the funeral home with social distancing being followed and masks being worn. Burial will be in Riverview Cemetery. Shelly was born on August 24, 1959 in Streator to Jack and Betty (Blue) Trotter. She married David Sunnen on August 6, 1983. He survives. Also surviving is daughter, Koren (Gabe) Koncor of Streator, nephew/adopted son, Joey (Alysha) Trotter of Fernley, NV, 3 granddaughters, Taylor Koncor of Streator and Lyra and Riley Trotter of Fernley, NV, brother, Robert Trotter of Streator and sister Jackie (Lonnie) Reeland of Streator and several nieces and nephews. She is preceded in death by her father, Jack Trotter, mother, Betty Majercin, step father, Frank Majercin, sister, JoAnn Trotter and father-in law, Gordon Sunnen and mother-in law, Francis Moore. Shelly attended Streator grade schools and graduated from Woodland High School in 1977. Shelly had a big heart and cared for so many of her family and friends and loved by everyone. Memorials may be made to The Family of Shelly Sunnen.

To order memorial trees or send flowers to the family in memory of Shelly J Sunnen, please visit our flower store.