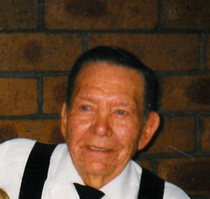 Richard H. Zurlinden, 92 formerly of Manville passed away Monday evening (June 23rd) at Good Samaritan Home, Flanagan.
Visitation will be held Saturday from 9 â€“ 11AM at the WInterrowd Funeral Home.  Funeral services will be held Saturday at 11AM at the funeral home.  Burial will be in Phillips Cemetery with flag folding honors conducted by members of the Streator American Legion and VFW.
Dick was born on May 18, 1922 in Dousman, Wisconsin to John Edward and Ethel Evelyn (Skiles) Zurlinden.  He married Bessie Marie Richards on June 5, 1947 she passed away on September 14, 2013.
Surviving are children James (Karen) Hoskins of Streator, daughter Joyce (Mike) Flahaut of Rantoul, son Richard (Linda) Zurlinden of Streator, daughter Darlene (John) Connor of Dewitt, Iowa, 15 grandchildren and 28 great-grandchildren.
He is preceded in death by his parents, wife, son Harold Hoskins, brothers Robert, Emory and Clarence.
Dick graduated from Streator High School in 1939 and attended Browns Business College.  He served in the US Navy during WWII and was a retired contractor of Zurlinden Brothers.  He was a member of the First Church of the Nazarene where he held several positions including board member and Sunday school teacher
Memorials may be made to the First Church of the Nazarene.

To order memorial trees or send flowers to the family in memory of Richard H. Zurlinden, please visit our flower store.