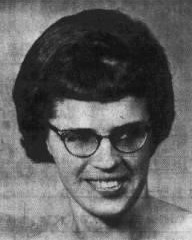 Visitation will be Monday from 11 – 1PM at Winterrowd -Hagi Funeral Home followed by a short graveside service at Hillcrest.

Beverly was born April 22, 1939, in Hoyleton, IL to Raymond and Mildred (Hake) Holbrook. She was baptized into the Methodist faith at her grandmother’s home in Hoyleton and for many years attended Sunday School with her Great Aunt Millie as her teacher. Over the years, her family moved several times but always stayed connected to church.

They settled in Streator in the early 1950's and Beverly attended Streator Twp. High School where her favorite activity was playing baritone in the band. High school is also where she met and eventually married John Guy with whom she had two daughters.

When she was younger, Beverly worked at Thatcher and Owens and later at Kroger where she retired.

She enjoyed traditional gospel music and watching her old shows on MeTV. Above all, she dearly loved animals, especially cats, and rescued many throughout her life. Her family is grateful to Illinois Valley Animal Rescue for taking in her final cats when it became clear she could no longer live independently.

Beverly did not have an easy life; she struggled with mental health which placed a strain on what should have been her closest family bonds. Her family is most grateful for the miracle that in the final years of her life she was able to mend those relationships, find joy in family, and allow herself to love and be loved. It took a long time but means everything.

Beverly was preceded in death by her parents, her husband, and by her brother, Herb Holbrook, this April. She is survived by her sisters Phyllis Holbrook of Hollywood, FL and Brenda (the late Robert) Weers of Rockford; daughters Sandra Guy of Westmont and Carla Haynes of Streator; grandsons Johnathan, Timothy, William, Jacob, Jeremiah, and Donald; and a especially beloved great-grandson, Riley, Nieces, Margaret Sullivan, Jean Hall, and Susan Weers, nephew Robert (Shelly) Weers and many grand nieces and grandnephews..

To order memorial trees or send flowers to the family in memory of M. Beverly Guy, please visit our flower store.