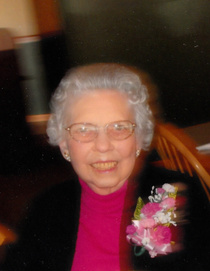 Melinda Marie Stephens, 89 of Streator, passed away Thursday morning (July 9th) at her home.
A visitation will be held Monday from 1:30 â€“ 3:00 PM at the Winterrowd Funeral Home.  Funeral services will be held Monday at 3 PM at the funeral home.  Burial will be in the Richland Cemetery, Leonore.
Serving as pallbearers will be her grandchildren and great-grandchildren.
Melinda was born on November 16, 1925 in Streator to Victor and Marie (Schroeder) Richard.  She married Gerald Stephens on January 16, 1944.  He survives.
Also surviving are daughters, Linda (Gene) Kencke of Central Point, OR, Janice (George) Wilts of Streator, seven grandchildren and 17 great-grandchildren.
Melinda is preceded in death by her parents and a grandson Dustin Kencke.
She attended Jefferson and Garfield Grade Schools and graduated from Streator High School in 1943. Melinda was a member of the First United Methodist Church and an honorary member of the United Methodist Women.
In lieu of flowers, memorials may be made to the First United Methodist Church Memorial Fund.

To order memorial trees or send flowers to the family in memory of Melinda Marie Stephens, please visit our flower store.