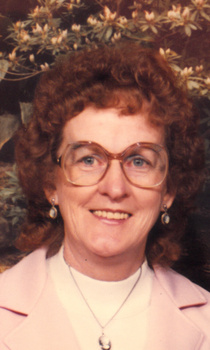 Alice Lamb, 87 of Streator passed away Wednesday morning (July 23rd) at St. Francis Medical Center, Peoria.
A visitation will be held Saturday 9 â€“ 11 AM at the Winterrowd Funeral Home.  Funeral services will be held Saturday at 11 AM at the funeral home.  Burial will be in Hillcrest Memorial Park.  Serving as pallbearers will be Mitchell Lamb, Tony Brown, Jack Council, Kenneth Wheeler, Larry Davidson and James Reynolds and honorary pallbearer Joe Palko.
Alice was born on December 20, 1926 in Chenoa to Louis and Mildred Elsie (Whiteside) Nicholson.  She married Donald A. Lamb Sr. on December 4, 1954 and he passed away on February 24, 2002.
Surviving are children Robert (Margaret) Quinn of Columbia City,Indiana, Cindy (Joseph) Higginbotham of Ottawa, Don (Lisa) Lamb of Beverly Hills, FL and John (Darlene) Lamb of Streator, 16 grandchildren and several great-grandchildren and great-great-grandchildren.
She is preceded in death by her parents, husband, daughter Sherry Wheeler and brothers Virgil and William.
Alice was an original member of the Calvary Baptist Church of Streator.
Memorials may be made in Aliceâ€™s name to Calvary Baptist Church or a charity of the donorsâ€™ choice

To order memorial trees or send flowers to the family in memory of M. Alice Lamb, please visit our flower store.