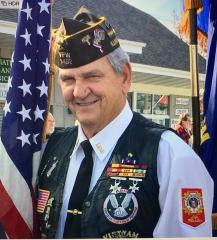 A visitation will be held Sunday from 3 – 6 PM at the Winterrowd Funeral Home with the rosary recited at 6 PM.  Mass of Christian Burial will be held Monday at 11:00 AM at the St. Michael the Archangel Church with Monsignor Phillip Halfacre officiating.  Burial will be in the St. Stephen’s Cemetery with full military honors conducted by members of the Streator American Legion Post 217 and Streator VFW Post 1492.

Serving as pallbearers will be sons Tim, Brad and Ryan Emm, son-in-law, Tyler Wright, friends Robert Gray and Shayne Schuler.  Honorary will be the 3rd Degree Members of the Monsignor George A Dzuryo Knights of Columbus.

Larry was born on September 26, 1946 in Streator to Norman and Goldie (Robinson) Emm.  He married Patricia “Pat” Stasko on August 11, 1966.  They were married for 53 years. They celebrated their 50th anniversary with mass at St. Michael’s Parish they renewed their vows by Monsignor Halfacre.  Then followed by a trip to Hawaii to celebrate. She survives.

Also surviving are sons; Tim (Haleigh) Emm of Streator, Brad (Jennifer) Emm of West Hills, CA and Ryan Emm of Streator, daughter, Megan (Tyler) Wright of Streator, 5 grandchildren, Sydney, Zachary, Sophie, Tristan and Aria, 1 due in December of 2019 and 1 due in March of 2020., sister Linda Rapson of Streator and several nieces and nephews also survive.

Larry attended Woodland School and he received is diploma in 2018.  He retired from Thatcher Glass in the C.M.R shop (Central Machine Repair).  Larry served in the US Marines during Vietnam from 1966 – 1968.  He was a member of the Streator V.F.W. Post 1492, Streator American Legion Post 217, DAV (Disabled American Veterans), Marine Corp League, St. Michael the Archangel Church, Life Member of the Streator Vietnam Veterans and the Streator Knights of Columbus.

Larry worked on the Vietnam Veterans Museum for several months in down town Chicago hanging the 58,000 plus dog tags in the entrance to the museum. Larry worked tirelessly to see that those Killed in Action in Vietnam got the proper respect. Larry has spent most of his adult life supporting all Veterans and seeing that they got the proper respect. Larry is the flag folder for the burial detail team here in Streator. The Burial team see’s that any Veterans family who wants a Military Funeral gets one no matter what the weather. Larry and a team of Veterans from the American Legion and the VFW perform this Ritual at not cost to the Veterans family. Larry has been a member of the team for over 20 years.

His hobbies were spending time with his grandkids, he also enjoyed spending with his family, friends and supporting local Veterans.

Memorials may be made in the form of masses

To order memorial trees or send flowers to the family in memory of Lawrence "Larry" D. Emm, please visit our flower store.

Recitation of the Rosary