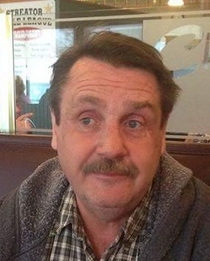 Lawrence George Kennedy, 53 of Streator passed away Friday afternoon (July 3rd) at OSF St. Francis Medical Center, Peoria.
Following cremation a visitation will be held Thursday from 10 â€“ 11 AM at the Winterrowd Funeral Home.  Memorial services will be held Thursday at 11 at the funeral home.
Lawrence was born on June 4, 1962 in Streator to George and Geraldine (Beamer) Kennedy.  He married Nicky Kirchner on September 15, 1995.  She survives.
Also surviving is a step-son Randy Kirchner of Streator, brothers Terry (Valerie) Kennedy of Streator, Garry (Diane) Kennedy of Milwaukee, WI, sisters June Hayes of Jefferson City, MO and Jane Kennedy of Streator and several nieces and nephews.
He is preceded in death by his parents.
Lawrence attended Streator Grade School and Streator High School.  He served in the US Army.  He enjoyed riding his bicycle, helping others and calling bingo at Fornoff Manor.
Lawrence was an organ donor so he can help someone else.
Memorials may be made to the Streator Salvation Army.

To order memorial trees or send flowers to the family in memory of Lawrence G. Kennedy, please visit our flower store.