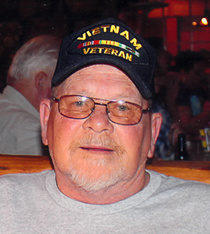 Larry E. Platt, 67 of Streator passed away Wednesday (Feb. 26th) at St. Maryâ€™s Hospital.
A visitation will be held Monday from 9-11AM at the Winterrowd Funeral Home.
Funeral services will be held on Monday at 11AM at the funeral home.
Burial will be in the Abraham Lincoln National Cemetery in Elwood, IL.
Larry was born on November 2, 1946 in Frankfort, IN to Neile (Wells) Ottinger.
He married Connie Butler on September 28, 1967.  She survives.
Also surviving are children, Lisa Platt of Springfield, Wayne Platt of Streator, Kimberly (Kevin) Robertson of Streator, Timmy (Carrie) Platt of Ottawa and step-daughter, Peggy Lou Ann Kochert of IN, 12 grandchildren, Kevin Jr, Kiley, Kurtous and Khali Robertson, Christopher, Brittney and  Mariah Platt, Cassie and Andrew Platt, Logan Tarbox, Kia Kochert and Sara Webster, 9 great-grandchildren, Sophia, Laycton, Lennox, Brayden, Keegan, Valarie, Cameron, Sabastein and Isabella.
He was preceded in death by his mother, Neile June Ottinger, brother, Max Ottinger, uncle, Dave Wells and step-father, Robert Ottinger.
He attended grade school and high school in Frankfort, IN.  Larry served in the U.S. Army and was a truck driver for G&D Integrate out of Channahon, IL.  He was a member of the Streator American Legion, Streator Eagles and Peru VFW.
Memorials may be directed to the family of Larry Platt.


To order memorial trees or send flowers to the family in memory of Larry E. Platt, please visit our flower store.