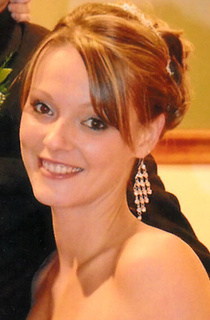 Katherine â€œKatieâ€ Renee Duda, 30 of Long Point passed away Thursday evening (July 23rd) from injuries received in an auto accident in Long Point.
A visitation will be held Monday from 4 â€“ 8 PM at the Winterrowd Funeral Home.  Funeral services will be held Tuesday at 2 PM at the Long Point Cemetery, Long Point. Serving as pallbearers will be Sheriff Tony Childress and Sergeant Jason Durham of the Livingston County Sheriffâ€™s Department.
Katie was born on May 4, 1985 in Streator to Kenneth and Suzanne (Overocker) Eutsey Sr.  She married Stanley Duda on May 28, 2011.  He survives.
Also surviving are sons Hayden Ashley and Stanley Duda Jr. both at home, father, Kenneth Eutsey Sr. of Cornell, mother, Sue (Daryl) Crow of Grand Rivers, KY, brother, Kenneth (Randi Clift) Eutsey Jr. of Long Point, sisters, Amy Kidd of Lexington, Sherri LaCombe of Louisiana and Raven Oâ€™Brien of Maine and paternal grandmother, Marcella Bell of Streator.
She is preceded in death by her brother William Mills, paternal grandfather Dale Eutsey and maternal grandparents, Edgar and Violet Overocker.
Katie graduated from Woodland High School in 2004, attended IVCC and was employed with the Livingston County Sheriffâ€™s Office since 2013 and was a Training Officer for the Department.
Memorials may be made to her sons Hayden and Stanley Jr.

To order memorial trees or send flowers to the family in memory of Katherine "Katie" Renee Duda, please visit our flower store.