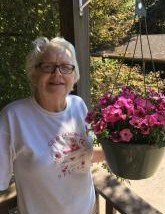 Following cremation, a visitation will be held Wednesday from 4 – 6 PM at the Winterrowd Funeral Home.  Services will be held at 6 PM at the funeral home with social distancing being followed and masks being worn.  Burial will be in the Cumberland Cemetery at a later date.

Karyn was born on July 7, 1941 in Streator to Bernard and Thelma Berniece (Mathes) Edmonds.  She married Richard Bentlin on October 25, 1959.  He survives.

She is preceded in death by her parents.

Karyn graduated from Woodland High School in 1959.  She worked many years at Woodland School and was a member of the Central Church of Christ where she sang in the church choir and was head of the kitchen department at the church for many years arranging for church dinners and funeral dinners.

Memorials may be made to the Central Church of Christ or a charity of the donors choice.

To order memorial trees or send flowers to the family in memory of Karyn L. Bentlin, please visit our flower store.