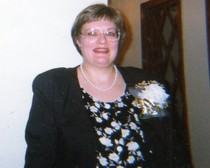 Karen T. Murphy, 58 of Streator passed away Saturday evening (Sept. 13th) at St. Maryâ€™s Hospital.
Cremation rites will be accorded.
A memorial visitation will be held on Saturday from 10-12Noon at the First Baptist Church, 204 Monroe St. Streator.
A memorial service will be held on Saturday at 12noon at the church.  Winterrowd Funeral home is in charge of arrangements.
Karen Tina Fish Brickert Murphy was born April 10, 1956, in Wichita Falls, Texas to Ray L. and Barbara G. (Endres) Fish.  An air-force family, the Fish's lived in several places before the untimely loss of Tech Sgt Ray Fish on August 28, 1963. Seven years later Karen and her brothers were then adopted by Streator farmer and IDOT worker Herbert Brickert when he married their mother. The Air Force kids became farm kids and the family settled in the area.

She married Charles Murphy on May 23, 1979.  He survives.
Also surviving is her mother Barbara Brickert of Streator, daughters, Brandy Lacy of Indianapolis, IN and Margaret Murphy of Streator, sons, Sean Murphy of Streator and Matthew Murphy of St. Louis, brothers, Jerry (Anita) Brickert of TX, David (Linda) Brickert of Pardeeville, WI, Randy (Gayle) Brickert of Streator and Ed (Lisa) Brickert of San Diego, CA, sister, Wendy (Gerald) Bagby of Streator, 3 brothers-in-law, Kenny (Cindy) Murphy of Kankakee, Gary Murphy of Zionsville, IN and Terry Murphy of Broadview, IL and sisters-in-law, Ann (Sam) Adams and Myrtle (Lornell) Murphy both of Milwaukee, WI.
She was preceded in death by her son, Michael Murphy, her fathers, Herb Brickert and Ray Fish and father-in-law, Hubert Marshall.
Karen graduated from Seneca High School in 1974 and attended Olivet Nazarene University in  Bourbonnais where she graduated in 1977 with a degree in English Education along with falling in love with, and marrying, her freshman zoology lab partner Charles Murphy. Karen's teaching skills came in handy raising the five children they would have. Karen also used her skills in teaching to minister for several years as a Sunday school teacher, and improved the quality of life for residents as an activity aide in a local nursing home.  She was a member of the First Baptist Church and the First Church of the Nazarene both in Streator and worked as an activity director at Camelot Manor in Streator.  Karen enjoyed life, enjoyed laughter, enjoyed reading the daily comics, and finding the bright side of the small things in the world. She liked to cook, liked to knit and crochet, loved to read and to save little things that she had read to share with others. She was kind and compassionate, and completely deserving of the love for her that she inspired in others.
Memorials may be directed to the family of Karen Murphy.
Winterrowd Funeral Home
305 S. Park St.
Streator, Illinois 61364
(815) 672-2703
www.winterrowdfh.com

To order memorial trees or send flowers to the family in memory of Karen T. Murphy, please visit our flower store.