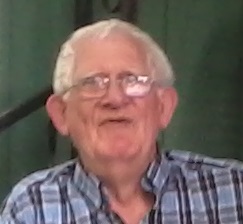 John C. Guy, 76 a lifelong resident of Streator, passed away at his home Saturday (June 4th).

John was born on November 21, 1939 in Streator to Carl and Alvina (Albertson) Guy.  On April 22, 1967, John married Beverly Holbrook to whom he remained steadfastly devoted until his passing.  She survives him as do their daughters Sandra of Westmont and Carla of Streator and 6 grandsons and joining his immediate family in mourning his loss are his sisters- and brothers-in-law Phyllis Holbrook, Herb Holbrook, and Brenda and Robert Weers; and numerous, nieces, nephew, cousins and friends.

John is preceded in death by his parents and a sister Sophie Guy.

His family was active members of St. Paul's Lutheran Church where he was baptized and confirmed.  He attended Streator public schools.  Following high school, John served for 8 years in the Army Reserves and worked at the Libby canning plant before joining Owens Illinois Glass where he remained until retirement.

He was a great fan of stock car racing, particularly at Fairbury, and even spent some time during his younger years in the race car driver Jack Tyne's pit crew.  In later years, John enjoyed keeping in touch with friends over his CB radio and, most of all, taking his beloved grandsons fishing.

A visitation will be at Thursday at 1pm at St. Paul's Evangelical Lutheran Church followed by a memorial service at 2pm.  In keeping with John's preferences, the family asks that attendees please dress casually and comfortably.  Immediately following, the family will inter remains privately at Hillcrest Memorial Park.

In lieu of flowers, memorials may be directed to the family.

To order memorial trees or send flowers to the family in memory of John C. Guy, please visit our flower store.