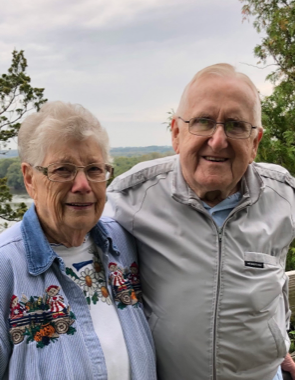 John E. Reynolds, 88 and Shirley Ann Reynolds 85 both of Streator passed away Thursday evening and Saturday afternoon, respectively at their home.

A Celebration of Life service will be held for both John and Shirley at the Knights of Columbus on Sunday September 26 th from 1-4PM.

John was born on October 24, 1932 in Streator to Arthur and Dena (Rahling) Reynolds.  Shirley was born on March 21, 1936 in Terra Haute, IN to Robert H. and Marie (Herrington) Montgomery.

Surviving is a daughter, Robin Rients of Streator, 7 grandchildren and 12 great-grandchildren.

John attended the Plumb grade school, St. Anthony’s grade School and Streator High School.  He retired from Owens-Illinois Glass in 1994 and was a member of the Streator Eagles Club.  Shirley attended Terra Haute grade school and Streator High School.  She held various positions including a taxi-cab driver, Butcher, In-home Caretaker, and local hospital (St. Mary’s) employee where she retired in 2000.  In addition, they were co-owners of the Kangley Inn for a number years during their lifetime.  Their passion included “togetherness”, eating out and their family!

Memorials may be directed to either the Lupus Research Alliance or the Arthritis Foundation.

To order memorial trees or send flowers to the family in memory of John Reynolds, please visit our flower store.