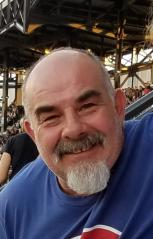 James I. Nodine, 56 of Streator passed away Tuesday morning (March 3, 2020) at his home in Streator.

Visitation will be held Saturday from 10 AM– 1 PM at the Winterrowd Funeral Home.

Funeral services will be held Saturday at 1 PM at the funeral home with full military honors conducted by members of the Streator American Legion and Streator VFW.

Following cremation, burial will be in Riverview Cemetery at a later date.

Jim was born on January 18, 1964 in Streator to Robert and Margaret (Lawrence) Nodine.

Jim is preceded in death by his father, Robert Nodine, mother, Margaret Council, half sister, Jennifer Schappaugh and half brother, Curtis Nodine.

Jim enjoyed hunting, riding motorcycles and working on projects.  He was a Chicago Cubs and Bears fan.

Memorials may be made to the Muscular Dystrophy Association or the charity of the donor’s choice.

To order memorial trees or send flowers to the family in memory of James I. Nodine, please visit our flower store.