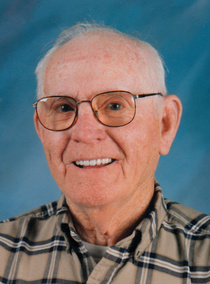 Eldon L. Marvin, 93 of Grand Ridge passed away Sunday evening (Jan. 12th) at his home.
A visitation will be held on Wednesday from 12-2PM at the Grand Ridge Funeral Home.
Funeral services will be held on Wednesday at 2PM at the funeral home.
Burial will be in Grand Ridge Cemetery.
Eldon was born August 8, 1920 in Sheldon, Illinois to Guy and Iona (Burgess) Marvin.
He married Betty Fullerton on May 4, 1958.  She passed away June 24, 2012.
Surviving is son, David (Jennifer) Marvin of Grand Ridge and 3 grandchildren, Taylor, Hayden, and Noah.
Eldon was preceded in death by his son, Michael Marvin and infant son Randy Lee Marvin, brothers, Gerald, Bill and Strawd Marvin and sisters, Ruth Keene and Jaunita â€œTeteâ€ Tyler.
He attended grade school in Sheldon, Illinois and was a member of the Grand Ridge United Methodist Church.
Eldon retired from Grand Ridge Grade School after 25 years and the A&P store for 25 years and served in the U.S. Army during WWII.
Eldon was known for his love and passion for raising birds.
Memorials may be directed to The Family of Eldon L. Marvin.
Winterrowd Funeral Home
305 S. Park St.
Streator, Illinois 61364
815-672-2703
www.winterrowdfh.com

To order memorial trees or send flowers to the family in memory of Eldon L. Marvin, please visit our flower store.