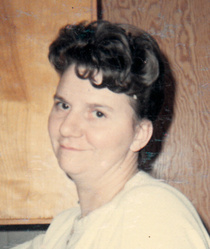 Dorothy J. Rogers, 83 of Streator passed away Thursday morning (April 16th) at St. Maryâ€™s Hospital.
A private family service will be held with burial in Hillcrest Memorial Park.  Winterrowd Funeral Home is in charge of arrangements.
Dorothy was born on April 18, 1931 in Tyrone, OK to Forrest and Grace Agnes (Babington) Lutes.  She married Arnold L. Rogers on May 10, 1952 in Santa Barbara, CA, he survives.
Also surviving are children Debra (Jake) Bressner, Amos (Debra) Rogers and Tony (Lindsay) Rogers all of Streator, 6 grandchildren: Sheri (Brian) Posey, Carrie Rogers, Adam Rogers, Eric (Beth) Bressner, Stephanie (Mike) Coons and Andrea Rogers, 10 great-grandchildren and 1 great-great-grandson, sisters Elizabeth Okerberg of Chillicothe, Leona Owenby of Westminister, CO, brothers John Lutes of Missouri, Donald Lutes of Peru, step-brother Silas Lutes of Missouri and several nieces and nephews.
Dorothy is preceded in death by her parents, grandson Brian Jerde in infancy, brothers Forrest â€œBoâ€ and Bill Lutes, sisters Jeanette Gall, Donna Witko and half sister Patricia Lutes.
She graduated from Henry-Senachwine High School in 1950 and was a member of the Central Church of Christ for 65 years where she taught Sunday School Classes.  Dorothy retired from Thatcher Glass in 1992 and had served several years as the union steward.  She was also active with the Streatorland Food Pantry.
Memorials may be made to a charity of the donorsâ€™ choice.
The family would like to give a special thank you to Heritage Health and Rehabilitation Care Center and St. Maryâ€™s Hospital for the wonderful care that was given to Dorothy.

To order memorial trees or send flowers to the family in memory of Dorothy Joan Rogers, please visit our flower store.