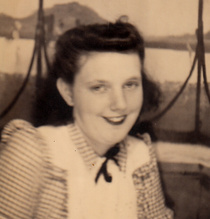 Dorothy E. Dudak, 85 of Streator passed away Saturday morning (August 2, 2013) at Parker Nursing and Rehabilitation Center.
Following cremation, a memorial service will be held on Thursday morning at 11:30AM at the St. Stephenâ€™s Cemetery Chapel.
Winterrowd Funeral Home is in charge of arrangements.
Dorothy was born on April 1, 1929 in Morris to Charles and Jenny (Claypool) Brown.
She married George Dudak on April 23, 1948.  He passed away in July 19, 1993.
Surviving are children, Chuck Dudak of Streator, Ann Marie (Jack) Flickinger of Lakeland, FL and Gary (Chris) Dudak of Blackstone, 7 grandchildren, 7 step-grandchildren, 4 great grandchildren and 2 great-great grandchildren and brother, Ken (Anna Mae) Brown of Ottawa.
Dorothy was preceded in death by her daughter, Mary Ann in infancy, grandson, Gus, great granddaughter, Katelin Gotch and 7 sisters and 3 brothers.
She was a member of the former St. Stephenâ€™s Church.
Memorials may be directed to the donorâ€™s choice.

To order memorial trees or send flowers to the family in memory of Dorothy E. Dudak, please visit our flower store.