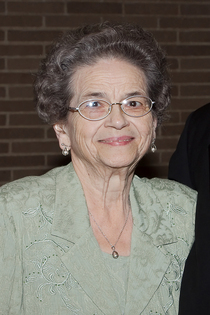 Doris L. Mitchell, 89 of Streator passed away Sunday morning (July 12th) at Heritage Health and Rehabilitation Care Center.
A visitation will be held Thursday from 10 â€“ 12 Noon at the Winterrowd Funeral Home.  Funeral services will be held Thursday at Noon at the funeral home.  Burial will be in Hillcrest Memorial Park.
Serving as pallbearers will be Daniel and Jason Mitchell, Joseph and Steven Pavlick, Wally and David McCoy.
Doris was born on January 15, 1926 in Streator to Melvin and Erma (Stucker) Whitlock.  She married Ellis Mitchell on September 16, 1955.  He passed away on January 13, 1987.
Surviving are son, Daniel (Rita) Mitchell of Sycamore, daughter, Cheryl (Joseph) Pavlick of Streator,  four grandchildren, 10 great-grandchildren,  and nephews Wally McCoy of Hawaii, Gary McCoy of Chicago and David McCoy of Streator.
Doris is preceded in death by her parents, husband, daughter Victoria Sorenson and a sister Louise McCoy.
She attended Garfield Grade School and graduated from Streator High School in 1943.  Doris was a member of the First United Methodist Church and longtime member of the Streator VFW Auxiliary.  She had been formerly employed by Smith Douglas Chemicals, the City of Streator and Wilkinson Plumbing and Heating.
In lieu of flowers memorials may be made to the Streator Public Library, the American Cancer Society or the American Diabetes Association.

To order memorial trees or send flowers to the family in memory of Doris L. Mitchell, please visit our flower store.