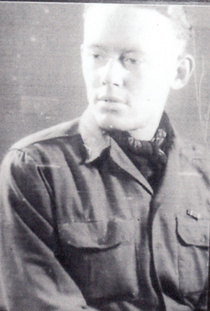 Donald C. Walker, 91 of Cornell passed away Friday morning (Oct. 31st) at his home.
A visitation will be held Monday from 10 â€“ 11 AM at the Winterrowd Funeral Home, Streator.  Funeral services will be held Monday at 11 AM at the funeral home with cremation rites following services.  Burial will be in the Cornell Cemetery with members of the Cornell American Legion and Streator VFW and American Legion conducting full military honors.
Donald was born on March 3, 1923 in Streator, IL to Clayton and Ethel (Kimes) Walker.  He married Florence Reynolds on June 15, 1946 she passed away April 1, 2008.
Surviving are children, Donna Rodrick of Streator, Dean (Connie) Walker of Cornell, Cindi (Jack) Gerard of Pontiac, Jack Walker of Las Vegas, NV and Virginia (Rodney) Behr of Burley, ID, 15 Grandchildren, 25 great-grandchildren and 2 great-great-grandchildren.
He is preceded in death by his parents, wife, 2 brothers Art and Ralph and sister Helen Ketterer.
He graduated from Cornell High School and retired from Owenâ€™s Illinois Glass in 1986.
He was a Veteran of WWII serving in the US Army and was a Life member of the Streator VFW and the Cornell American Legion.
Memorials may be made to a charity of the donorsâ€™ choice.

To order memorial trees or send flowers to the family in memory of Donald C. Walker, please visit our flower store.