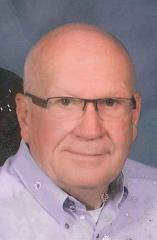 Graveside services will be held Wednesday at 12noon at the Long Point Cemetery.  The Winterrowd Funeral Home assisted the family with arrangements.

He is preceded in death by his parents and a daughter Mary in infancy.

Dale graduated from Woodland High School in 1960. He served in the US Army from 1966 until 1968 in Vietnam.  Dale retired from Owens Illinois Glass as a combustion Engineer and after retiring from Owens he was a was a driver for the St. Mary’s Hospital Adult Day Care and lastly employed at Wheeler Grain in Long Point.

Memorials may be made in his name to either the Long Point United Methodist Church or to the Illinois Veterans Home, LaSalle.

To order memorial trees or send flowers to the family in memory of Dale L. Mueller, please visit our flower store.