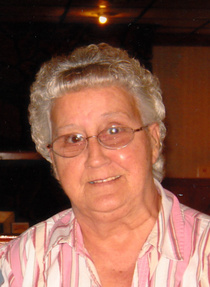 Betty L. Majercin, 82 of Streator passed away Thursday afternoon (Dec. 4th) at her home.
Following cremation a visitation will be held Tuesday from 9:30 until 11:30 AM at the Winterrowd Funeral Home.  Funeral services will be held Tuesday at 11:30 AM at the funeral home.  Burial will be in Riverview Cemetery.
Betty was born on August 5, 1932 in Streator to Ernest R. and Edna (Harlarcher) Blue.  She married Frank E. Majercin Sr on September 1, 1973 he passed away on June 20, 2012.
Surviving are daughter Jackie (Leonard) Reeland of Streator, son Robert Trotter of Streator, daughter Shelly (Dave) Sunnen of Manville, step-daughter Kathy (Mike) Weishan of AZ, daughter in law Julie Trotter of Streator, 10 grandchildren, 1 step-granddaughter, 15 great-grandchildren and several nieces and nephews.
Betty is preceded in death by her parents, husband, daughter JoAnn Trotter, granddaughter Stacy Trotter, brothers Ernest, Ronald, George, Robert, Darrell and Anson Blue, sisters Helen Friede, Marlene Liston, Barbara Rogers, Rosemary and Carol Blue.
She retired from Thatcher Glass in 1981 and was a member of the St. Michael the Archangel Church and the Streator American Legion Auxiliary.
Betty enjoyed taking trips with her husband Frank to Wisconsin, spending time with her family and was an avid Bingo player especially at the Knights of Columbus.
Memorials may be made to a charity of the donorsâ€™ choice.

To order memorial trees or send flowers to the family in memory of Betty Lou Majercin, please visit our flower store.