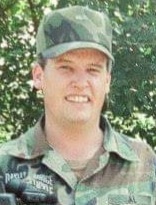 Cremation rites were accorded and military honors will be at Bay Pines National Cemetery in Tampa, FL at a later date.

Allen was born on September 10, 1952 in Streator to Aldon and Dorothy Pat (Zebell) Turpin.

He is survived by his wife Sondra Turpin whom he married on September 17, 1976.

He is preceded in death by his father, Aldon Turpin and mother, Dorothy Pat Miller, grandparents, Roy and Doris Zebell and Elzia and Maggie Turpin.

Allen graduated from Streator High School in 1971. He served in the United States Army and the National Guard.  Allen was employed by Thatcher/Anchor glass companies for many years. He and his wife owned and operated Oakley Bridge Bait and Tackle. When the glass factory closed, he relocated to Florida. He was employed by the Hillsborough County of Tampa until his retirement.

Most near and dear to his heart was the bait shop and his customers, especially the little kids. While making little to no profit, he and his wife kept the shop running for the little ones they adored. His beautiful smile beamed when they came to the shop.

Known to the kids as "Fishing Pal Al" he and his wife sponsored the Kids annual fishing Rodeo at Lazy Acres, along with help of the Streator Police Department. He headed the "Hooked on Fishing Not on Drugs" Campaign. Those kids were his pride and joy. Thru the years, they always wondered how many children's lives we inspired by fishing.

He always said "if we've touched just one child, it was worth everything ".

Allen's last request was to pass at home with his loving family and he achieved his goal.

He will be deeply missed by all who loved him.

To order memorial trees or send flowers to the family in memory of Allen Turpin, please visit our flower store.

Family to do services at a later date