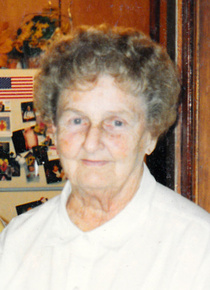 Adelma Marguerite Ide-Crockett, 93 of Streator passed away Sunday evening (July5th) at her home.
A visitation will be held Thursday from 1 â€“ 3PM at the Winterrowd Funeral Home.  Funeral services will be held Thursday at 3 PM at the funeral home.  Burial will be in Riverview Cemetery.
Serving as Honorary Pallbearers will be Carter Dodge, Skyler Davis and McKenzie Yanek.  Active will be Erica Dodge, Jeremy, Toni and Nicholas Yanek, Dave Ide and Jake Fetters.
Adelma was born on September 20, 1921 in Streator to James and Marcella (Schmitt) Hooton.  She married Alque M. Ide on June 14, 1941 and he passed away on December 16, 1967.  She later married Clifford Crockett on August 2, 1969 he passed away on October 1, 1997.
Surviving is son Jerry (Sally) Ide of Rolling Meadows, daughter Beverly Hefler of Streator, grandchildren Jeremy (Toni) Yanek of Bettendorf, Iowa, Erica Dodge of Streator, Jenny (Jake) Fetters of Huntertown, IN and Dave (Keara) Ide of Barrington and 12 great-grandchildren.
Adelma is preceded in death by her parents, husbands, son Ronald Ide in infancy and a sister June Hooton.
She attended Streator Grade Schools and Streator High School.
Adelma loved flea markets, yard sales and shopping.  Most of all she enjoyed her grandkids and great-grandkids.  She will be greatly missed by all.
Memorials may be made to the family of Adelma Crockett

To order memorial trees or send flowers to the family in memory of Adelma M. Ide - Crockett, please visit our flower store.